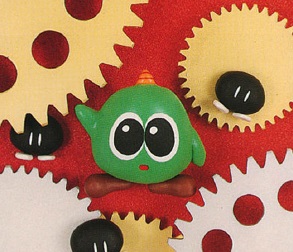 Gimmick!
At first, Sunsoft's Gimmick! looks a lot like a Kirby game. The hero, Yumetarou, a wide-eyed green blob with stumpy legs, attacks by throwing glowing stars. The enemies are all toys that have come to life, and most of the levels are colorful. This is deceiving though, because Gimmick! is hard. Very hard. It's also one of the most incredibly well put together action game of the era, though.

Like Sunsoft's earlier Batman: Return of the Joker, Gimmick! was designed to compete with the early generation of Genesis and SNES titles. In the end, it ends up surpassing most of them. There are only seven not-entirely-long stages, but each screen has an incredible amount of care put into it, often with superfluous but charming details. Somewhere in the second stage, there is a motionless enemy which, if you pick up the second controller, you can briefly command. If you manage to beat this stage quickly enough, you can find the level boss taking a snooze, allowing you to push him off a ledge and immediately win the level. There's a prevailing sense that some of the enemies aren't really "bad guys" per say, they just want to play with you, like the cat creatures in the third stage that bounce around then retreat after a few steps. Some enemies appear just once or twice throughout the entire game, making their sole appearances special.

It's also one of the very few 8-bit action games with an actual physics engine. Sloped surfaces can give you enough inertia to make incredible jumps, but can also be used to change the angle of your bouncing star weapon, which you can then jump on top of and ride. Mastering this is essential to finding each hidden treasure, one per stage, which lets you unlock the final level and the true ending. You also need to beat the game without continuing – another crazy, challenging task. Like most great games, though, the difficulty comes not from poor design, but from intimately learning the details of each screen. However, given the charming world the developers have crafted, it's well worth the effort. The game looks and sounds great, too. Sunsoft ranked up next to Konami as having some of the strongest sound programming on the NES (see: Journey to Silius, both NES Batman games), but Gimmick! uses an add-on sound chip which bolsters the synthesis, creating one of the best soundtracks of the system. Sadly, as a late Famicom release, Gimmick! was mostly ignored. It was set for release in America but canceled, and only trickled out in small quantities in Scandinavia (sans the extra sound chip), creating an aftermarket price that restricts ownership to hardcore collectors.

Gimmick! looks and sounds a lot like Ufouria: The Sage, another colorful 8-bit Sunsoft game released around the same time. It stars four goofy, weird little beings, each with their own specific power, as they run and jump around a non-linear universe. It’s filled with bizarre quirks, like platforms with faces that drool, allowing you to climb up, or birds that poop 16 ton weights. It, too, was scheduled for American release but was canceled, though an English European version does exist. It's not nearly as difficult or well-crafted as Gimmick!, but Ufouria is still charming. In Japan, this game was called Hebereke, and started a whole franchise of games starring the same characters, though stuck in different genres (puzzle, racing, and so forth).